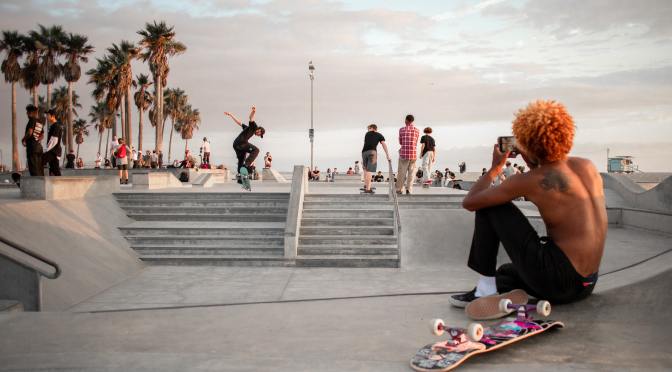 A question that brings much debate; is skateboarding a sport or an art? Many would argue it’s a sport, pointing to the fact there’s a competitive aspect to it making skateboarders athletes. Others see it as more of art, a form of expression in live-action. With the city or the skate park as a blank canvas, and the board as your paintbrush.

“I consider skateboarding an art form, a lifestyle and a sport.” – Tony Hawk

Or could it be a mesh of both? Let’s take a brief look at skateboarding’s origins. Skateboarding stemmed from surfing in the 1950s, referring to skateboarders at the time as “asphalt surfers”. It was an alternative to surfing when the waves weren’t good. An outlet for freedom, mimicking tricks and motions from surfing. As it evolved into an industry in the 1960s, contests began to surface. As businesses got involved, skateboarding became a bit more organized, and like anything with business, it was looked at from the perspective of how can a profit be generated.

After landing “The 900”, Tony Hawk became one of the most well-known names in vert skateboarding. Helping launch the X-Games into the mainstream. With the mainstream comes advertisers and sponsors seeking to make a profit off the participants and the event. There’s no doubt that competitive skateboarding has provided careers for many of the most well-known skateboarders across the globe. Most participants who reach the podium at the pro level receive a significant cash payout. Pros often rely on the contest circuit as a source of income. They also rely on their sponsorships, however, in many cases the income from just endorsements isn’t adequate enough to make a living. Unless the opportunity for a signature shoe deal lands in your lap.

“I think that things are poetic when they don’t have a boundary. Without rules. My life is poetic.” – Mark Gonzales

We can’t fail to mention the other ways skateboarders make an income. Photo incentives from predominate magazines for ads and interviews land skateboarders a pretty nice check. The art of skateboard photography and videography plays a significant role in skateboarding. Publication companies like Thrasher, TransWorld, and even 411 Video Magazine back in the day offered a creative outlet to showcase skateboarding in a more artistic and cinematic way. Often times skateboard photography and videography is more organic, boundary-free, and sporadic. There are no rules, there’s no competition, it’s just you, the environment, and what you can produce and display. All for the sake of documentation for others to enjoy and consume. This element truly makes skateboarding an art.

Now, who’s to say if skateboarding is completely an art or a sport. Suppose it’s completely up to one’s interpretation. One’s choice, that’s the best part. Skateboarding is whatever you want it to be. No one should be making that choice other than you. No one should be forcing you to compete and no one should be forcing you to produce a video part. Unless that’s what you want… there’s that personal freedom again we’ve been talking about. For example, the guy who likes to stack photos/clips doesn’t have to skate contests, and the guy who likes the organized competitive jock aspect of skateboarding doesn’t have to take part in the more creative or artsy aspect. Some skaters prefer both, this is how they make ends meet as a professional.

Guess the point is you don’t have to choose one or the other and you definitely don’t have to be pushed to compete or produce clips unless that’s your goal or you signed a contract. Skateboarding always has and always will be about having fun. When it stops becoming fun, it’s no longer what skateboarding is really all about. Individuality, creativity, freedom, and most importantly fun have always been at skateboarding’s core since its inception.

One thing is certain though, skateboarding is a unique lifestyle and subculture that few truly understand or appreciate. That makes it special and in comparison to other more mainstream activities, skateboarding’s roots have always stemmed from the outcasts, unpopular, and misunderstood. That’s what makes it different, that’s what makes it what it is. A culture full of individuals who take a different approach to life and see things through a different lens. Those who think outside the box and never really sought to just “fit in”.

Agree or disagree? Let us know in the comments. This a hub for respectful discussion. Thanks for reading.

First off, welcome to Domain Skateboard Magazine. Some of you may have known us as Domain Premium Apparel. We’ve decided to switch it up and shift our focus to the world of digital media. Specifically, an online magazine focused on the underground skate scene and bringing the latest in skateboarding from across the globe to a device or screen near you. But don’t worry, we’re still going to be offering killer merch for you all.

So let’s kick off with a brief bio, I’ve been a skateboarder for over 20 years. I’ve worked at skate shops on both the east and west coasts. Specifically in Orlando, FL, and Long Beach, CA. I’ve also worked as a skateboard instructor at a skate park in the Metro West area of Orlando. I even got an opportunity to work at a well-known skate park design and build company based out of central Florida. I primarily took care of their social media and marketing. In short, I got paid to write articles and share content.

To no one’s surprise, skateboarding is something that I’m pretty passionate about, so is writing and sharing content. So the decision to combine the two seemed like a no-brainer. This is an idea I’ve had for some time now. Creating a hub for the culture, not only in my local community but across the globe. Highlighting free-thinking individuals, creatives, musicians, artists, writers, and skateboarders. With the goal of bringing attention to names in the subculture you’ve never heard of before.

I’ve owned and operated Domain Premium Apparel since 2012 with a good friend of mine who lives on the West Coast. From the beginning, we’ve always promoted some of the best and rising talent in our local communities. Offering sponsorships and helping them along their paths to success in the industry. We’ve been featured in retailers on both the east and west coasts, and shipped purchases all over the United States from our website. Merging the apparel brand into an online mag is a big change. But it’s one we feel is best and allows us to continue enjoying our passion. It also allows the brand to be more open to who we promote and involve. Our focus is less about exclusivity and sponsorship and more about inclusiveness and community.

We’re looking to build community, culture, and share killer content. Domain Skateboard Magazine is that avenue for us now and we’re grateful to have you join us. We’re excited for what the future holds and we’re grateful for all of our supporters throughout the years. Cheers to this new chapter for Domain and thank you all for reading.

Thanks again and enjoy!

Check out this popular product review video of the Adidas Tyshawn Jones signature shoe by Nick Murphy. For more videos sure to subscribe to Nick’s YouTube channel by clicking here.

We’re a hub for the culture. Highlighting free-thinking individuals, creatives, musicians, artists, and skateboarders. Our goal is to bring attention to names in the subculture you’ve never heard of before and bring you a fresh new perspective. With a focus on thought-provoking articles, killer original content, and promoting some of the best rising talent from across the globe.

We humbly welcome you to our domain and we’re grateful you’re a part of it.

To stay up to date with us, subscribe to our biweekly newsletter. To receive the latest news and content sent directly to your inbox.

HAMMER OF THE MONTH:

TUNE TRACKER: Nothing but Enemies